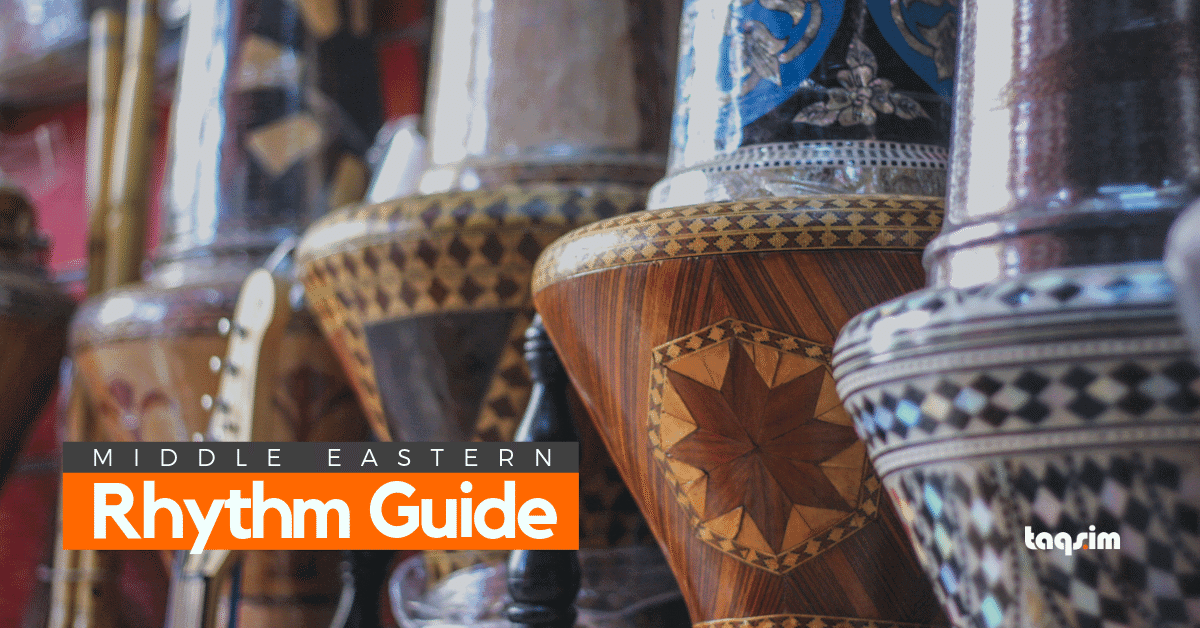 Ayoub is a popular rhythm in Arabic music in 2/4 time. This is quite an aggressive and exciting rhythm, with a driving energy that leaves little room for excessive niceties or ornamentation. As you can tell by listening to its default setting, this is typically a meter played at a generally fast tempo. In this beat, the “doum” of the drum is played on the downbeats 1 and 2 with the “teks” of the drum played on the last 1/16th note of the 1 beat (i.e. the “uh” count right before the 2 downbeat) and on the “and” 1/16th note on the 2 beat. Listen to the sample beat to play along and familiarize yourself.

Beledi (Baladi) is a standard and one of the most common Arabic rhythms, and is in 4/4 time. It has a very powerful feel for the “doum” (typically, but not always, the downbeat – usually the 1 and 3 are the downbeats here with a “doum”) and the “tek” (typically, but not always, the upbeat – the tek is typically played on the 2 “and” as the upbeat, and on the 4 count as the downbeat). You can hear this meter in a wide variety of Arabic and Middle Eastern music. Play along with the sample to train your ears to the feel of this beat.

Beguine is based on the popular dance and music form (similar to a rhumba) associated with Caribbean origins, although it is a combination of Latin Folk dance and ballroom dancing rhythm. This rhythm is a 4/4 meter, which emphasizes beats 1, 3 and 4, and is now heard all over the world and can be heard from time to time in Middle Eastern music.

Ciftetelli (Çiftetelli Tsifteteli τσιφτετέλι) is one of the most common rhythms of Anatolia and the Balkans, and can be counted either as a 2/4 or 8/4 meter. Its origins may be in Turkey or Greece, but it is used all over the Middle East, as its unmistakable driving beat contains a hypnotic quality. You may have heard this kind of meter in belly dance routines as it provides spacing and accommodation for sensual dancing.

Curcuna is a 10/8 meter used by various cultures throughout the Middle East (by Turks, Armenians, Syriacs, and in Iraq especially). The subdivisions are 1-2-3, 1-2, 1-2, 1-2-3. For most western ears this can feel unusual and should be practiced thoroughly to acclimate oneself to the feel of the meter and its accents.

Halay refers to the 2/4 meter traditional line dancing in Anatolia, and is a part of various cultures in that region. Many folk songs are played in a Halay style rhythm.

6/4 is a traditional waltz-like rhythm which is counted as a 6/4 meter for various folk songs across several cultures of the Middle East, Anatolia and the Caucasus.

6/8 time in the sample included here is a robust and fast-paced 6/8 meter which can be heard in the music of the Caucasus and Anatolia, specifically traditional folk music of Armenia, Azerbaijan, Georgia and in other cultures across the region as well.

7/8 is based on a subdivision of 1-2, 1-2, 1-2-3 and is popular in Anatolia with many cultures, and is said to originate in the “Laz” region near the Black Sea. Given the odd meter, be sure to listen to the rhythm closely to hear the accents and groove.

9/8 which is known as “Karshilama”, is a common rhythm in Middle Eastern music, notably with Turkish and Romani songs. The subdivisions are as follows: 1-2, 1-2, 1-2, 1-2-3 (three consecutive 2 counts, concluding with a 3 count which gives this meter its unique feel). Emphasis is typically placed on the 1, 3, 5 and 7 beats, with some players also accenting the 8 and/or 9 counts. This song is popular in folk dances and belly dance routines.