5 Guitar Gods from the Middle East 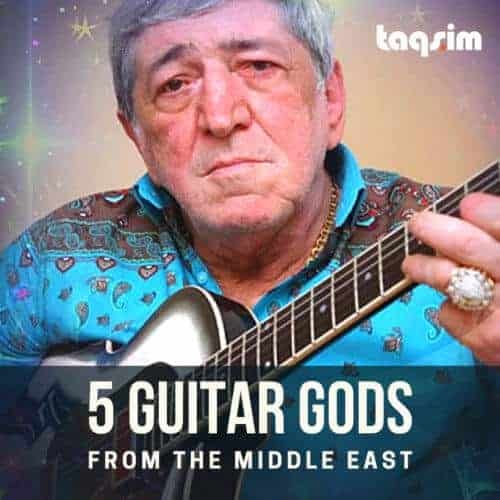 Whether it be acoustic, electric or even fretless Middle Eastern Musicians have been incorporating the use of guitar in their music in unique ways. Here are 5 of the best!

Omar Khorshid was a well-known Egyptian musician and composer whose unique style of incorporating eastern and western sounds was considered revolutionary in the Middle East during the 1960’s – 1970’s era. He accompanied some of the greats in Arabic Music, and started his musical journey by teaching himself guitar, violin and piano. First playing in small clubs, Khorshid was noticed for his virtuosic playing and refreshingly modern sound of that time. He was first invited by Abdel Halim Hafez to play electric guitar with his Oriental Orchestra, followed by Oum Kalsoum and her orchestra. In 1973 Khorshid moved to Lebanon where he began making his own records and this continued until his death in 1981. You can check out one of his solos, against the backdrop of a great 70’s Arabic vibe below.

Erkan Ogur is a pioneering guitar player and composer from Turkey who invented the first fretless classical guitar in 1976. He has greatly influenced Middle Eastern Music by combining the sounds of Turkish folk music and classical music together. He is also regarded as a master of the kopuz and bağlama lutes, and is known for his versatility in performing and recording with some of the most accomplished musicians from all over the world. Ogur projects a haunting, emotive style through his fretless guitar technique…

Remish (Rafig Guseynov) is the godfather of the Electric Guitar in Azerbeijan. He rose to prominence as a people’s musician, playing in groups with the likes of Baba Salamov, Zeinab Khanlarova, Afrasiyab Badalbeyli and Vagif Mustafazade. He’s noted for playing a distinctive red Jolana Special (said to be made in Czechoslovakia, which last we checked officially stopped being a country on January 1, 1993) guitar made in the 60’s and 70’s. He plays either with a clean tone or his signature fuzz sound, and really offers the listener a totally unique style and approach.

Suren Mehrabyan, affectionately known as Surig, is an Armenian musician and composer known for his mastery of the guitar – he also plays the Oud, Saz, and Tar at a high level. Originally from Baku, Suren emigrated from Baku to the United States and has become a mainstay in the Armenian Music scene of Southern California for quite some time. He has recorded on hundreds of tracks and released several of his own instrumental records. Currently, he primarily performs with the Tigran Asatryan ensemble. Mehrabyan is a real treat to listen to, and pushes the boundaries of what a guitar should be able to do and sound like.  Fascinating stuff.

Armik (Armik Dashchi) is an Iranian Armenian flamenco guitarist and composer. He can be distinguished a bit from the above musicians as his playing centers more around the flamenco style – nonetheless Armik is a true virtuoso who is an absolute pleasure to experience. With over 30 albums and hundreds of compositions to his credit, Armik has made a name for himself across the globe.

Please comment below if there are any other guitar players you think should be on the list.

3 thoughts on “5 Guitar Gods from the Middle East”