Is the Duduk Really Armenian? 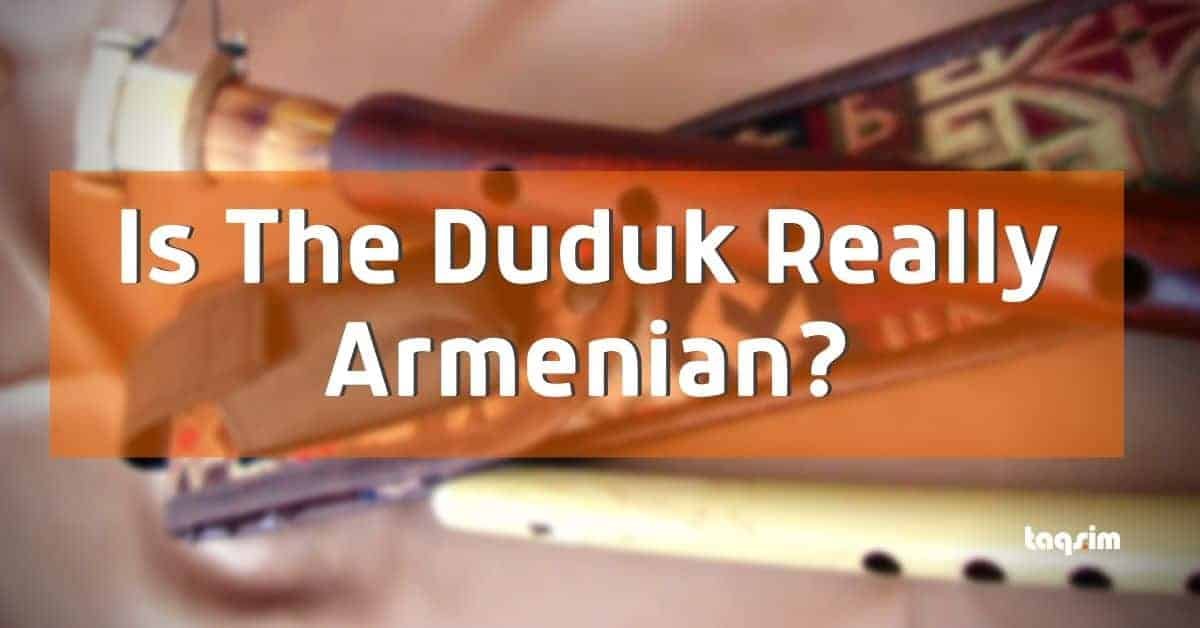 Our new synth app features a splendid display of numerous instrument samples – one of which is the duduk. As soon as you saw the title of this post, as the reader, your mind likely visualized a deep and emotional movie scene soaked in the tears of the soundtrack’s multi-thousand-year-old weeping duduk.

So what’s the story with the duduk?

The duduk is a double-reed woodwind instrument widely associated with ancient origins in Armenia. Through a wave of usage in the Western world, the mournful instrument has left a deep and lasting impression on the global music scene, providing haunting accompaniments in albums, movies, television shows, soundtracks and concerts galore (Gladiator, Ronin, Syriana, Passion of the Christ, Battlestar Galactica, Yanni performances, etc.) – so much so that it has reached a point where study of the duduk has expanded beyond the realm of Armenian musicians into something bordering along the mainstream. If you’d like a full analysis on the role of the duduk in modern music, film, and television, here is a great read done by the LA Times.

So what do we know about the instrument?  It is pretty consistently attributed to the Armenians and wikipedia states it is at least 3000 years old. The sources which state as such, however, tend to be infirm or pervaded with tautological approaches (as in, it’s old, because it’s old). There are similar sounding instruments in various neighboring countries, such as the duduki in Georgia, the mey in Turkey and the balaban in Azerbaijan. Depending on the region where a particular country is situated, trees indigenous to that area will serve as the material for making the instrument (plum, walnut or apricot trees). The Armenian variety are typically made with apricot wood, which provides a distinctive and noticeably different sound from the woods generally used in other countries. Nonetheless, the version of the duduk we hear today, which can be seen as consistently discussed and mentioned to be “thousands” of years old by various sources, may actually have a bit of a more complicated, and much more recent history. A history rooted in politics, revolution and social and cultural engineering, specifically the Sovietization of the Caucasus states, including Armenia:

Article info: A Look at the Emergence of the Concept of National Culture in Armenia: The Former Soviet Folk Ensemble
As this article states, the duduk’s sound in recordings before 1926 was decidedly different than the tone and timbre heard in duduk’s in the modern era, and more closely resembled what people might recognize as a zurna (another – much more high pitched and piercing – double reed wind instrument) by today’s musical expectations and norms. In essence, there is evidence that the duduk heard today was designed and built less than 100 years ago, in line with, and as a result of, Soviet cultural engineering, departing from its origins as a zurna-sounding like instrument.
Let’s look a little deeper. Nercessian’s research continues: 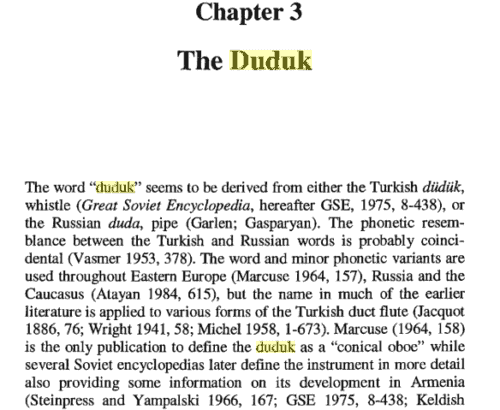 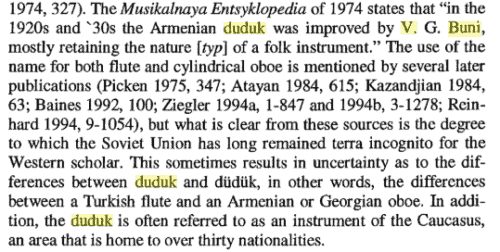 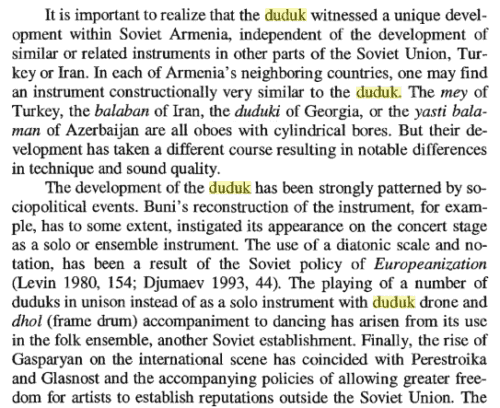 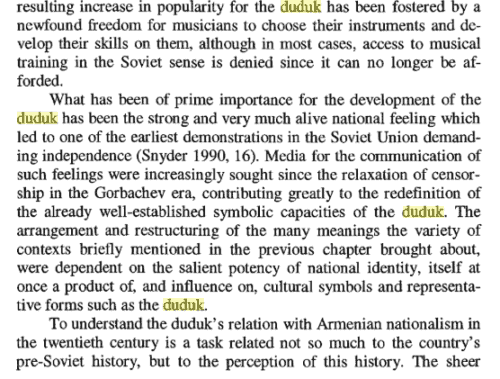 The Turkish and Russian words of duduk and duda respectively – which are from completely different language families sounding nearly identical to the Armenian name is quite a coincidence. And there is more information on the reconstruction of the duduk by V.G. Buni and the development of the instrument in Armenia vis-a-vis other neighboring countries.
So where does this take us? When it comes to music – a multicultural, innately shared and inescapably diverse artistic medium – the answer is that the question of whether an instrument is “______ian” itself may not be all that meaningful.  What is the utility in assigning definite and closed borders to the understanding and view of an instrument’s origins? As we can see, the support for the multi-thousand year old ancient Armenian-only narrative of this instrument is not absolute, and also, upon closer detailed examination, unearths sources outlining that the modern duduk may have been a byproduct of political events and sociocultural engineering programs which modified an already existing – and decidedly different – instrumental ancestor.
Does this mean that we should not enjoy listening to the duduk? Of course not – quite the contrary.  It’s one of TAQS.IM‘s favorite instruments!
Let us know what you think in the comments below!
Newer The Beatles, Frank Zappa & Erkan Oğur: Fretless Guitar Innovation
Back to list
Older Emad Shakouri: Persian Kanun & World Music

2 thoughts on “Is the Duduk Really Armenian?”