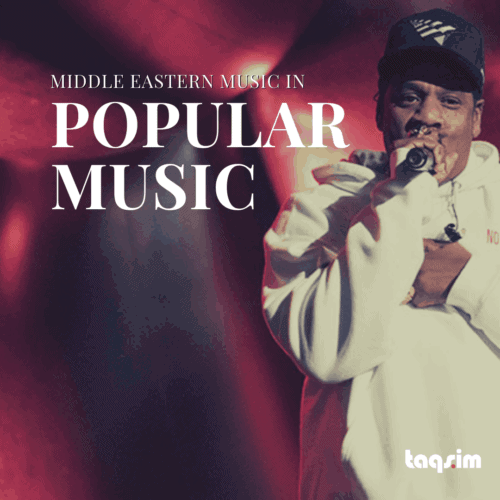 Whether you’re listening to Youtube, Spotify, or your satellite or terrestrial radio, at one point or another you will inevitably hear a song that has been influenced by Middle Eastern and/or Gypsy style music. It’s become evident that Middle Eastern music has made its way into the mainstream over time, and in a pretty serious way. From jazz to hip hop to rock to electronic sampling of music, we take a look below at some examples of genre-bending fusion – this is by no means an exhaustive list so please let us know what we’ve missed in the comments section!

“Take 5” – one of the most famous jazz classics (also known as the highest selling jazz single in music history), and as one might expect, this song incorporates odd time with its 5/4 meter thanks to Brubek’s experiences traveling overseas in Eurasia. Spending time with local musicians he was inspired to record the album “Time Out” which featured various unusual and heretofore unfamiliar time signatures (at least to Western audiences). With an exotic melody composed by saxophonist Paul Desmond, set against the backdrop of a light piano vamp by the incomparable Dave Brubek with his jazz quartet, “Take 5” was the big hit off the album, and may be the most well known music in the world which incorporates middle eastern influences.

“Kashmir” – iconic classic rock band Led Zeppelin’s famous opus “Kashmir” was influenced by guitarist Jimmy Page’s interest in modal music and Arab and Eastern scales. You can really hear the effect in the haunting guitar and strings sections. “Kashmir” is considered by many to be Led Zeppelin’s most impressive composition and its exotic sound gave the band major credibility beyond its standard rock ‘n roll accolades.

“Come On-A My House” – this hit helped put Rosemary Clooney on the map (Aunt of actor George Clooney). The song’s lyrics pay homage to the Armenian tradition of inviting over family and friends for generous and overflowing tables of food, nuts, fruits, and other delectable treats. Clooney was known for her dialect style of singing at times, and this track embodies that dynamic quite noticeably. Written by cousins William Saroyan (Pulitzer Prize winner) and Ross Baghdassarian (founder/creator of Alvin and the Chipmunks) – the song definitely had legitimate artistic chops!

“Misirlou” – this middle eastern/Mediterranean classic was made popular in mainstream circles thanks to the left-handed Dick Dale’s (lefties do it better!) rendition with his inimitable guitar tone (he was after all the King of the Surf Guitar). Dale also has Lebanese ancestry on his father’s side for some extra flavor 🙂

“Talk Dirty to me” – this song features a sample from the song “Hermetico” by fusion group Balkan Beat Box, incorporating the silky smooth sax of Ori Kaplan (formerly of Gogol Bordello, also featured by Fifth Harmony for another hit “Worth It”). This is a great example of how Middle Eastern / Gypsy styles were being brought in for sampling by R&B and hip hop artists.

“Big Pimpin” – this early 2000s rap hit by Jay-Z includes a sample from the song “Khosara Khosara” aka “Khusara”, which was composed by Baligh Hamdi, vocally recorded by Abdel Halim, and arranged and performed by Hossam Ramzy. You can hear what sounds like a middle eastern wind instrument known as the Ney along with percussion and strings throughout the song. Where would rappers be without these cool-sounding middle eastern samples? 😉

“The End” – composed by The Doors, here is another example of a classic rock band (psychedelic/stoner rock even!) weaving in Middle Eastern modes into their music. It’s a long track – take a listen:

We hope you enjoy the songs and information provided above – please let us know what you think in the comments below!