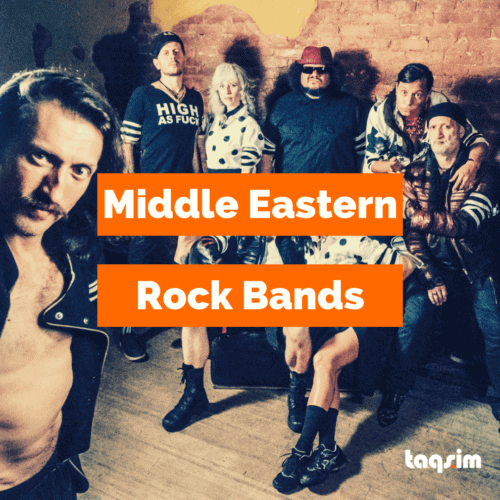 Our last blog post explored the effect of Middle Eastern music on mainstream artists where there was a song or two which had that special seasoning – which segues perfectly into our next piece here exploring some artists out there who are not only not exactly mainstream, but are in fact more directly and wholly defined by their middle eastern artistry which is a central and key component of their respective musical identities and generally in the projection of their sound. Be sure to let us know what you think in the comments below!

Perhaps the most well known rock band to have such strong middle eastern background and roots, this Los Angeles based quartet consists of 4 Armenian Americans rocking out with aggressive guitars, driving grooves, and screaming vocals. SOAD has registered some big hits with tracks like “Chop Suey”, “Toxicity” and “Aerials”, and when listening to this group it’s immediately evident that their rock tendencies are substantially balanced and blended through their eastern sensibilities with soulful melodies, haunting vocals and in frequent and varied cases, middle eastern sounding songwriting. So much so, that in one notable case, guitarist Daron Malakian actually used an oud in the band’s song “Nuguns” for the bridge/solo section from ~1:32 – 1:58, featuring some tremolo (ok maybe a lot, but sounds great!), slides and arpeggios, along with the metal/hard rock sounding guitars keeping with the beat. Using an oud in rock is pretty darn cool (and becoming more prevalent as we’ll see with one of the other artists in this list). The band’s lead singer Serj Tankian also is known for his very distinctive and powerful voice, which has unmistakable roots in his own Armenian heritage and the family’s time in Lebanon during his youth. Check out “Nuguns”:

Gogol is a prominent “Gypsy Punk” band, incorporating violin and accordion along with more traditional rock/punk instrumentation. Their hit song “Start Wearing Purple” has become a festival favorite all around the world, but like the other artists in this list, they too have deep influences out of the mainstream which form the actual core of their artistry. Sampling their discography one hears a lot of folksy/eastern sounds with violin (by Sergey Ryabtsev) and lively accordion work (by either Yuri Lemeshev or Pasha Newmer depending on the year) accompanying frontman Eugene Hutz, a Ukrainian born vocalist who theatrically strums his guitar dancing around the stage (sometimes shirtless and/or with a bottle of wine in hand). Hutz has Servitka Roma (i.e. Romani, aka Gypsies who were from Serbia but had ended up in Ukraine/Russia over time) ancestry on his mother’s side, and this identity clearly provides a big part of the band’s artistic inspiration. Ori Kaplan used to be a part of the group as well and is a member of Balkan Beat Box who is also in this list (we had featured him in the last blog post for his saxophone work for Jason DeRulo’s sampled song “Talk Dirty to Me”). Check out their live rendition of “Start Wearing Purple” from 2008 Coachella, which has an awesome improvisational intro to the song:

Consisting of a mix of Greek and Armenian musicians, this group goes all in with fusing middle eastern and rock as it uses, as a focal point and as an essential part of its core overall sound, the oud and duduk as main melodic instruments playing alongside heavy guitars, bass and drums. In addition to years of touring all over the world and performing at some of the biggest festivals around, Viza has also toured with Serj Tankian (System of a Down singer) for his solo project and Gogol Bordello so the middle eastern-rock vibe is real. The band also uses odd time signatures, such as the 7/8 meter of the song “Kings and Queens”, and 9/8 meter in their recent single “Pathway“, along with a heavy Middle Eastern dance rock song “Vanished”. If you want to hear oud using all kinds of processors and different tones from sythn pads to a vocoder to distortion, check out Viza’s recent double EP release “The Unorthodox Revival: Volume I” and “The Unorthodox Revival: Volume II” – pretty fascinating to hear a fretless instrument plugged through some of these effects:

This Israeli act blends Middle Eastern, Balkan, Gypsy Punk, Reggae and Electronica for a very unique song. “Dancing with the Moon” as a cool dance hall vibe mixed with great saxophone/horn work, and “Adir Adirim” features a very slick Middle Eastern sounding guitar riff to a steady dance beat. As we detailed in our last blog post, their saxophonist’s (i.e. Ori Kaplan) playing has been sampled in some pretty mainstream tracks. With a stated goal of taking ancient and traditional music and blending with hip hop, BBB wants to introduce these vibes to dance clubs.  Their song “Bulgarian Chicks” was their first breakthrough track with a Balkan/Gypsy feel and has some really cool traditional melodic/harmonic patterns in there – really great band with an awesome and unique sound:

An Israeli heavy metal band which blends Jewish, Arabic and other West Asian influences, their stated purpose is to promote peace and unity among the Jewish, Islamic and Christian religions. They feature bouzouki in their music which is super interesting alongside the usual instruments. They’ve won a Global Artist of the Year Award with Metal Hammer and were selected by Genesis guitarist Steve Hackett for a collaboration, so these guys clearly rock all over the world. Their track “Like Orpheus” has a strong Middle Eastern sound along with their aggressive rock,  and “All is One” is draped over a dynamic 7/8 time signature (sounds like a Laz Bar!) incorporating what sounds like a bouzouki and heavy distortion guitars:

What do you think of these groups? Did we miss anyone? Share your thoughts in the comments section!

END_OF_DOCUMENT_TOKEN_TO_BE_REPLACED

You don't often think of rhythm players as being "virtuosos", but every so often you may come across someone that shatters the mold...