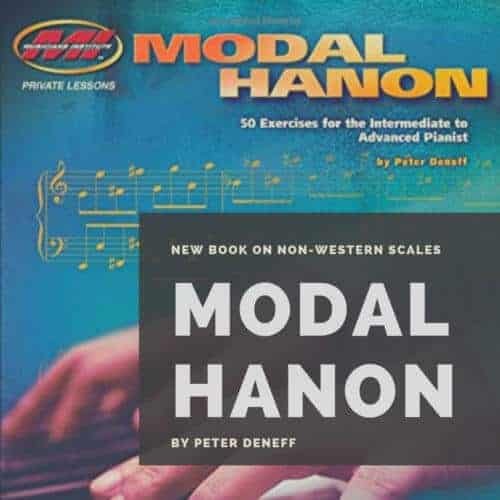 Want to expand a bit beyond the major scale and the three “flavors” of minor? Check out this new book on non-western scales!

We recently came across the new book “Modal Hanon: 50 Exercises for the Intermediate to Advanced Pianist” by Peter Deneff. It’s a great practical introduction to some of the most common non-western modes and scales that composers and improvisers use. Although written for piano, it can be used by any musician working on building their “chops” and technique. The book includes exercises for the following scales (note that these scales would not be microtonal so to speak, but instead the equal-tempered “westernized” versions of these modes so that they can be played on the piano):

An example from the book is listed below: 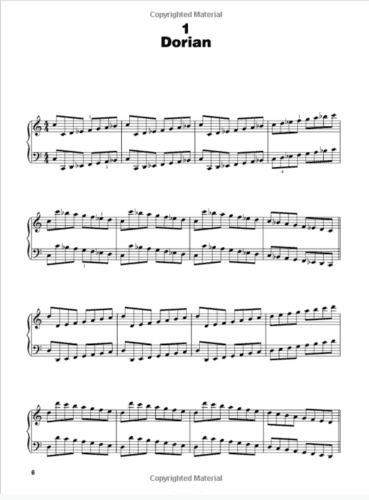 The book can be purchased on Amazon here.

About the Author, Peter Deneff

Peter Deneff grew up in a musical home, exposed to classical music, Greek songs, and the Beatles. After several years of classical piano lessons with Leaine Gibson, he began jazz studies with the world-renowned pianist and David Bowie band member, Mike Garson. During this time he also studied many ethnic styles that influenced his composition and playing. He studied music composition and film scoring at California State University Long Beach, where he earned his bachelor’s and master’s degrees in classical music composition. While at CSULB, Deneff composed his Three Greek Dances for String Quartet, which has been performed in the U.S., Canada, and Australia.

Peter has written many best-selling books for Hal Leonard Corporation and has produced and recorded numerous arrangements for Yamaha, Hal Leonard, and PianoDisc. His original music and scoring was featured in the award-winning Charlie Sheen film, Five Aces. In 2012, Deneff composed the score for the feature film Love of Life. In early 2013, his involvement with the Hollywood animation community afforded him the opportunity to write the score for the short film, “The Annies: 40 Year Retrospective” which was presented as one of the highlights of the 2013 Annie Awards at Royce Hall, UCLA, and featured the legendary voice actress June Foray. Also, in 2013, Deneff scored the film, A Journey into the Holocaust, produced by Paul Bachow.

Deneff’s original project, Excursion, features mostly original works in a style that could be best described as ethno-jazz. Excursion’s sound is a blend of Brazilian, Cuban, Greek, Armenian, classical and progressive jazz. The group has been featured twice at the Playboy Jazz Festival and regularly performs at Herb Alpert’s Vibrato Jazz Grill and at the World Famous Baked Potato in Hollywood.

On the academic side, Peter has taught at Musician’s Institute Hollywood, Orange County High School of the Arts, Cypress College, and Fullerton College.

Other Books by Peter Deneff